One of electronic music´s most influential recordings, the legendary E2-E4, from 12.12.1981 gets an official re-release by Manuel Göttsching on his own Label MG.ART. Carefully overseen by the Master himself. A timeless and incredible piece of music that everyone should have in their collection. Spread over 2 sides of heavy weight vinyl, this 58 minute long epic is one of the most stunning pieces of music you will ever hear.

Manuel Gottsching — E2-E4. Story behind the predecessor of Techno & House music
Germany after WW2 was a country with a devastated culture — there was no connection with the former country and all types of modern German art were reborn. There were no labels, no agents, no managers, no producers, but there was some creative energy — the pioneer Manuel Gottsching talks about it in almost every interview. Garage bands trying to imitate the great ones were soon replaced by those looking for new senses — many-faced krautrock, at the origin of which our character stood, turned German teenagers’ heads. Gottsching quickly came to compositional minimalism: when a whole well-knit composition was built around one small musical idea or one short chord. He was impressed by the simple technique of American Terry Riley, who put the sounds of an electronic organ into an echo machine on his album Persian Surgery Devishes. Manuel did a similar thing when he released his first solo album Inventions for Electric Guitar in 1975.

Today this sort of thing is called ‘guitar drone’ or, more often, ‘ambient’ 🙂 For Gottsching, it was always a search for a new language of his favourite instrument from which our main character had been inseparable for nine years. He went through a period of collective writing — Ash Ra Temple, a long-haired cult, collapsed and Manuel carried on its legacy under the name of Ashra, nevertheless slowly getting rid of it.

The former drummer on the first albums by Tangerine Dream and Ash Ra Temple Klaus Schulze gave up drums soon after starting a solo career, but he was still friends with Gottsching, plus they had a similar style. So, in the autumn of 1981, these two successful musicians toured around the whole of Europe giving live performances. The interviewer notes: they weren’t like contemporary groups’ gigs where the band plays the album tracklist and that’s it. Manuel and Klaus actually improvised on the stage, listening to each other and creating something new every time. This was what he learned from the gigs of the great Jimi Hendrix: “I don’t like to go to a concert and listen to a musician or a band that reproduces an album in the same way they recorded it; it makes no sense. You can listen to the album.” From the end of September to November, for six weeks, they performed every other day. And then the German promoter declared bankruptcy and everybody had to go home: Klaus to Hanover, Gottsching to Berlin, 300 kilometers further away. “There’s a certain atmosphere between two people when they’re together every day for six weeks. It’s a kind of connection which is very in-sync. It’s difficult to stop it and say, ‘Okay, it’s over now’. Pretty soon afterwards, we wanted to hook up again. We arranged to meet up in Hamburg at a concert one of out friends was putting on and I wanted to have something to listen to on my journey. So I sat down in my studio, took a drink, switched on the tape machine and came up with a piece of music which for lasted 58 minutes and 15 seconds. This track later became E2-E4”. 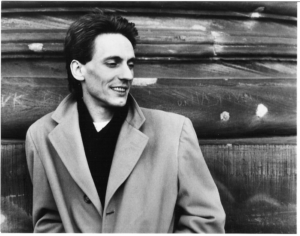 As it turned out later, Goettsching had spent several years getting ready to record his most important album in just one hour. He created his own studio in 1974 when he was 22 and carried out sessions an hour and half long in order to study every connected piece of equipment. Manuel said later: “Studio is my instrument.” The trick is to know how to smoothly introduce any box with levers into the record. It’s exactly the same as having musicians in an orchestra where Goettsching is the conductor. The simplicity of the E2-E4 record wins listeners over, but as usual simplicity is the result of a difficult search for it. You have to spend lots of time, go through hardships to the stars, to a clear understanding. It all came together on Saturday at noon on the 12th December 1981: “In 1981 I was working on a new solo album, and my plan was to make a big composition. I’d increased all my equipment and I wanted to make a more synthesized, orchestral composition. So I working on this piece and tat piece but I couldn’t really get into it or finish it. Then I just played for one hour and I had a beautiful piece. Very little preparation. First oscillator, second oscillator, changing envelopes. It’s very quickly done, just ten minutes. Start with one instrument, then ho the second, then the third, back to the first, change it a little bit, start with something else, go back, always interacting. About eight instruments at the same time. I started with the two chords, with a sequencer controlling the volume of each of the steps, and that makes the shifting accents that go through the piece. I don’t change the chords, I change the accents. One hour, just once, and finito. It was a fantastic moment.”

The two chords that became the basis of the record, not changing for the whole 58 minutes, represent one of the reasons why the album is called Е2-Е4 — like a move over one square, the beginning of a chess party and of a new solo career — Göttsching as a big chess fan loved concept albums and beautiful names. “I listened to it again and again and thought, ‘Okay, maybe this is something I should release.’ But I had a problem because it was 58 minutes and the CD was in the development stage. I knew about CDs but normal media was vinyl, so making it on vinyl was not possible without a break. My contract with Virgin was open because there was an option to continue after the four albums, but Virgin had changed very much from a very independent company to a very commercial company. It was okay, but I thought my music is maybe not anymore the right stuff for this company. So, they invited me and I thought they would probably buy it, but it would be put in a corner and they would forget it. I had a chance to speak with Richard Branson, who I knew at the time, and he said, ‘It is great.’ He had a baby in his arms and it fell asleep, and he said, ‘This music is fantastic, you can make a fortune with it’. But I didn’t leave it with Virgin, and I waited two years and my old friend Klaus Schulze was doing a new label. He asked me if I wanted to release something and I thought, ‘Okay, let’s give it a try.’ So, it was released in ’84, but without spectacle and got some very bad reviews, that this is boring.” A Berlin magazine called Zitty understood neither the idea nor the conventional tracklist about mittelspiel and tore the record apart, writing that there was no justification for releasing such an album and that it wasn’t music but a sin. Later the magazine apologised.

Now E2-E4 is a recognised classic piece of electronic music that is seen as the beginning of ambient, house and techno. This is why Göttsching’s name was modified into Gottfather. Derrick May called the record with a chess-themed sleeve one of his favourites (and it’s not surprising that many of his greatest albums reveal Göttsching ’s influence). Carl Craig, a representative of the second wave of Detroit techno, released records under the pseudonym C2C4, which was a clear homage to Manuel, not to mention the countless remixes of his works. Four days after the release of the album, he got a call from a label — an Italian businessman addressed them, wanting to receive permission for a E2-E4 remix. Manuel agreed, but on the condition that he would listen to the remix before its release. Very soon, three Italians were sitting in his small studio in Berlin and presented him with their remix, together with Carolina Damas’ sighs. According to the interviewer, Göttsching didn’t understand any of her words but it all sounded cool.

All image and audio content is used by permission of the copyright holders or their agents, and/or according to fair dealing as per the UK Copyright, Designs and Patents Act 1988.
0
£0.00
This website uses cookies to improve your experience. We'll assume you're ok with this, but you can opt-out if you wish.Accept Read More
Privacy & Cookies Policy

Any cookies that may not be particularly necessary for the website to function and is used specifically to collect user personal data via analytics, ads, other embedded contents are termed as non-necessary cookies. It is mandatory to procure user consent prior to running these cookies on your website.

In light of COVID19 we’ve closed our online checkout but we are still shipping in the UK. To make an order please contact us. Dismiss